skip to main | skip to sidebar

Yet another blog location

I've found another place for blogging: Tumblr.
It's great for collecting random blurts. Less than a blog, more than a Twitter or Facebook status update.

I say that I learned this. That's not entirely the case. I guess I should say I finally put a label on something which I had known to be true.
This simple difference in communication style leads to quite a few "Get to the point, already"s. The problem is, I don't always know what the point is.

That's a big difference, between she and I. When she says something, she's already done the necessary thinking. Because of this, she can pose a well reasoned, intelligent sentence. Me, on the other hand, I talk while thinking. It's part of the process. I like to think it works for me. I'm very Socratic, in that respect.

Of course, no one would know the name "Socrates" if his incessant questions had annoyed Plato. Socrates might have had a tall, cool glass of hemlock much earlier in his career.

My dog wants me to ask all of my readers to read his new blog. Gus thinks he's going to become some type of internet celebrity. Good luck with that. He eats cat turds. Like people would ever take him seriously.

In other news, things continue to go well for the Old Lady and I at the new house.
Work is under control, and I'll be taking a mini vacation to watch my beloved Kansas City Royals take on some other ball club which is also from Missouri.
This micro vacation will involve:

So much stuff going on lately.

I last posted almost five months ago. Since then, work has become even more hectic than I could have ever imagined.

My former supervisor threw a tantrum at work and was demoted. We ended up switching jobs. I was thrust into her role, more of a supervisory role, with much, much more paperwork, and a healthy dose of other extra responsibilities.

The company I work for is very technology forward. We embrace technology and the changes it can bring. The former co-worker did not. She doesn’t work here anymore because of this fear of change.

So now I have my old job back.

And my new one, too.

Before she left, I estimated that three people could be kept fairly busy 40 hours weekly with the work the two people in our department were tasked with. Now it’s only me. And we continue to grow.

So I’ve been busy like I never thought possible for the last few months. But in those few months, we were able to create a few tools which greatly simplify my job, making me a much more efficient worker. We’re also adding another person to my department, so I’ll be able to delegate some of my work down, again, and maybe get to spend my weekends…

Tinkering with my new house. 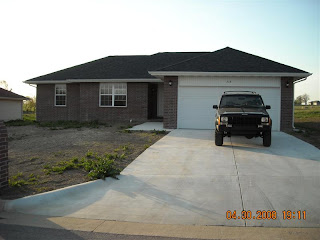 The Old Lady and I saw the silver lining in this slumping housing market and realized we could make a pretty sound investment. We bought a brand new house in a rapidly growing suburb of Springfield. We like it.

I now have a backyard (dirt, really, at this point) for the dogs to run amok. I now have an office to which I can retire and do nerdly things on computers and other gadgets. I now have a list of things to hang and paint and build. I really miss building things.

And all of this happened not a moment too soon, because….

The apartment the Old Lady and I had been inhabiting had become (unbeknownst to us) uninhabitable.

After maintenance came to fix the fifth water leak in the ten months we had been renting the apartment, they found a rather large mold infestation. (Pics for the brave among you) Over half of the walls on the first floor had mold growing on them.

The environmental inspector we hired to check on the air quality called our apartment a “petri dish.”

And the management has yet to apologize for any of it. They did, however, agree to let us out of our lease. This is, literally (and here I believe I use the word correctly), the least they can do.

And that’s pretty much why I haven’t posted in about half a year. 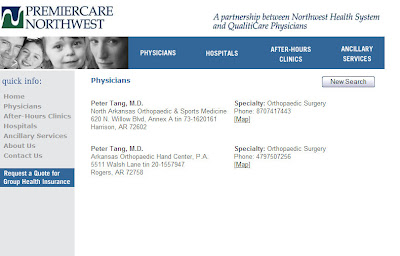 If you're ever in Northwest Arkansas and need your bones operated on, look up Dr. Peter Tang, MD.
He'll take good care of you.